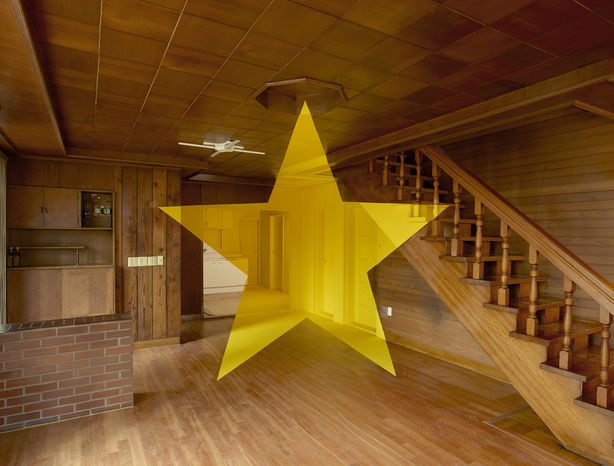 The second Cheongdam Project by Georges Rousse was produced in the gallery space of the WAP Art Space during the construction of the building.

It ran for nineteen days from April 15 to May 3, 2016, and resulted in five works. The artist created paintings, drawings and a collage on the frame of the building, which is now covered with wooden panels, plaster and bricks. The artist again demonstrated his ability as an artist and a photographer who can use his personal sense of space in order to morph it with color and light. As the first ‘resident’ of the place, he created works that reveal the properties of the space, magnified by his own fantasy.

Seoul IV, which exists in three different versions, represents a “sphere” floating in a deep and narrow passage. Being Rousse’s favorite shape, the circle is a metaphor of the camera lens, which plays a crucial role in the whole working process. It also was a challenge for the artist to draw a perfect circle in a three dimensional space. In the first stage, a circle was painted in black, graphically marking the space. The black circle was then covered with prepared newspapers from various countries. All the images in the newspapers were obliterated in an iconoclastic manner so that black rectangles and squares rhythmed the monumental collage. The work reflects the communication networks in our Babel-like world. Finally, the circle was painted in blue, creating a meditative space flooded with blue light.

Seoul V was an installation in a semi-cylindrical staircase connecting two floors of the gallery. In this narrow vertical space in concrete, two circles were drawn in the shape of an eclipse creating a dramatic anamorphosis.

Seoul VI was made in the underground patio. Rousse created a 7.5 meter high by 9.8 meter wide mural, integrating scaffoldings that hindered his sight as a component of his installation. The geometric composition echoes the floorplan, and the architectural aesthetic of the WAP Art Space. It is also the artist’s personal homage to Mondrian. The print was produced in a large format (300 x 405 cm).