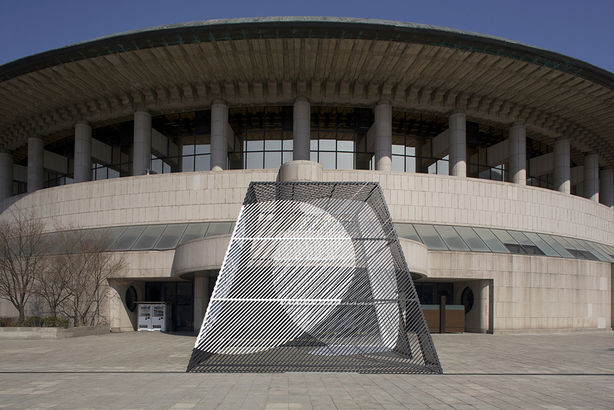 A world-reknown installation artist and photographer, Georges Rousse creates pieces whose beauty comes from the crossover between the 2-Dimension and 3-Dimension.

They invite the spectators to observe and feel 'the flat and the cubic', 'reality and apparition· simultaneously, allowing an interesting and peculiar experience. The historical and societal understanding that cultivated his experience as a writer will be added on to the history of the Seoul Arts Center who will be celebrating its 25th anniversary. A monumental masterpiece in modern art is much anticipated.

Seoul Art Center(SAC) is very pleased to invite Georges Rousse who is one of the most prominent installation artists in the world from France to commemorate 25th foundation day of SAC. The exhibition will be held from 15th April 2013 to May 25th, 2013 under the title of Space, Fiction and Photography.

It consists of three parts; a new memorial work of the 25th anniversary of SAC, several existing works created in the beautiful spots of the world and some of photographs and videos shooting every process of making the works.

First, for this fantastic project, Georges Rousse will design and install his works in SAC from the middle of March to April 2013. During the installation, the process is supposed to be recorded as photographs, which will be mainly put on display in Hangaram Art Museum. Some of the installation pieces including the commemorative work will remain in SAC during the exhibition. Pre-applied volunteers are going to involve the whole installation process. It is expected that this exhibition will provide our audience with unconventional and innovative experience of modern art.

Secondly, his established photographs which he possesses in Paris will be on the exhibition. In his photographs, Georges Rousse compels us to read architecture as static, images as immobile, then gradually transforms our perception of Space and Reality. The final photographic image perturbs our visual habits and convictions by presenting three kinds of space: the real space, where he makes his installations; an imaginary utopian space, which the artist invents and then carefully builds at his chosen site; and a new space that is visible from only one spot when he clicks the camera shutter, and exists only in the photo.

At last, there will be a various drawings, pictures and videos catching the creative process on. Audience will be able to understand the way how he works with dimensions and lines. The convergence of spaces goes beyond a visual game : Like a hall of mirrors, enigmatic and dizzying, it questions the role of photography as a faithful reproduction of reality; it probes the distances between perception and reality, between imaginary and concrete.