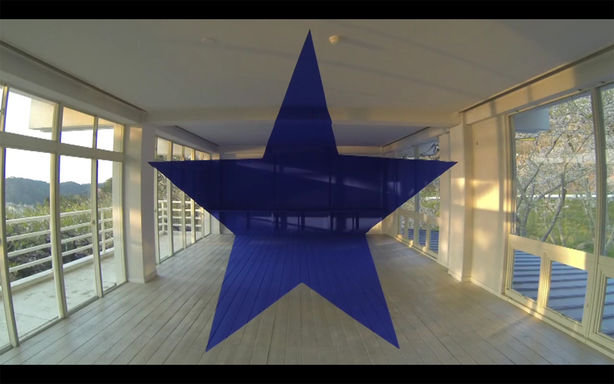 The Georges Rousse Art Project in Miyagi began with the largest snowstorm in 60 years and ended with the cherry blossoms in full bloom.

Eighteen years ago, after he finished his project in Kobe in the summer after the Great Hanshin Earthquake, Georges Rousse (born in Paris in 1947), partly to trace the poet Basho Matsuo’s footsteps, visited Sendai.

Café Loin, which has been closed since the Great East Japan Earthquake of March 11th, 2011, stands on a hill overlooking Matsushima Bay. Rousse, who has been creating his own unique world by painting on walls of abandoned buildings and taking their photographs since he was in his 20s, produces new visions by quickly recognizing the sense of time and space that buildings hold, with his acute phsycial perception and observation skills trained by years of experience. The single absolute perspective seen through his 4x5 box camera, held by a solid tripod, acts as a catalyst that prompts the magic-like transformations of these spaces.

The first night he visited Café Loin, the stars that Rousse imagined were inspired by haiku, such as Soseki Natsume’s “The lamp once out. Cool stars enter. The window frame,” Issa Kobayashi’s “Beautiful, seen through holes. Made in a paper screen: The Milky Way,” and the post-war jiyuritsu poet Santoka Taneda’s “The tastiness of rice. The blue, blue sky” in Tabigokoro. Rousse’s love of haiku must come from the parallelism between its rhythmic composition that crystallizes the mundaness of the seasons into universal expressions through its modest 17 characters, and his own original art that sublimates a simple geometric shape drawn in an unassuming space into incomparable artwork.

We first tore down the giant bar counter and the partition walls in the workspace, eliminating artificial features that come with running a cafe, and restored the space to its original, neutral state. One side of this clean white interior, where natural light beamed through, was draped in the color of night, and a single star shining in the dark sky appeared. This white star reflects the shadow of a fledgling Japanese maple leaf. At the same time, as its negative, the nocturnal star holds the energy to reverse such whiteness into brilliant foliage.

As May approched and the hard cherry blossom buds rapidly unfolded, so too did Rousse’s work. Starting at eight in the morning to contemplate on his own, his skillful hands did not stop till the sun went down at six thirty in the evening. And a blue star that shined during the day emerged. Waves of pink-tinted somei-yoshino cherry blossoms drift on both sides of this blue star.

This is the first time that Rousse created a work of opposites: night and day, negative and positive. Along with the wisdom of the people who came together for this project, refusing to forget about the painful past of the earthquake and tsunami, along with the beautiful stars shining its course, I trust that both hope and the prospect of the future will steadily navigate the path forward for this region and this country. A wonderful work full of such sentiments was created with the thoughts and wishes of all those who supported this endeavor.

After finishing this project, we visited Shiogama City’s Katsurashima and the razed city of Ishinomaki where the scars left by the tsunami are still evident. Matsushima 2013 Negative and Matsushima 2013 Positive（作品名でしたら、英語名があるか確認が必要です）will undoubtedly convey to the world, memories of the devastated landscape along with the beautiful yet severe force of Tohoku’s nature. Aomi OKABE - Curator of Georges Rousse Art Project in Miyagi