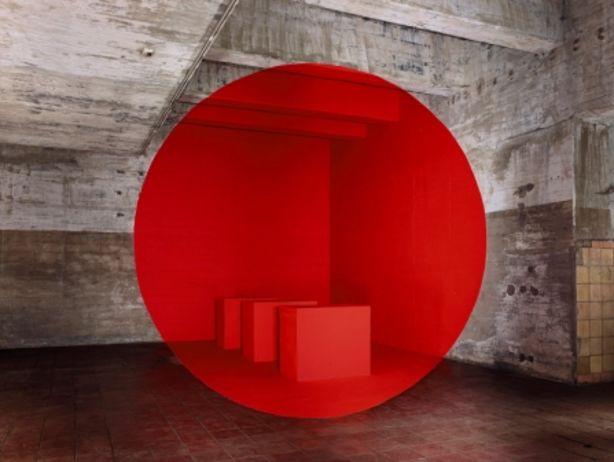 For RAY 2015, the Darmstädter Tage der Fotografie  (Darmstadt Days of Photography) is showing a new production by the French artist Georges Rousse.

Rousse engages himself with space and its transition into a two dimensional image. He uses material, color and wood constructions to create two- or three-dimensional objects, which he then photographs from a predetermined fixed position. In so doing, his intervention and the architectural structure merge.

The effect of his images goes far beyond trompe-l’oeil or an op-art aesthetic, and is much more a penetration of picture and space that join together in such a way as to create a new entity.

At the beginning of December, Georges Rousse visited Darmstadt scouting possible locations for a new production: an abandoned US armed forces barracks, the Hessische Landesmuseum Darmstadt, a small art gallery, a World War II fall-out shelter and the Hofgut Oberfeld.

In addition to the new production, further current works can be seen at the Designhaus Darmstadt.

The Darmstädter Tage der Fotografie originated from an initiative of photographers in 2004. Since then, this international festival numbers amongst the most important German photography events.  It sets relevant themes and promotes interdisciplinary discourse in photography.

The festival exhibits offer a unique and in-depth, often surprising synopsis, of how art photographers interpret a respective theme. Alongside established photographers, up-and-coming artists have the chance to present their new perceptions and photographic approaches at various exhibition locations.

For artists and visitors alike, the festival offers a lively platform for mutual discoveries and personal exchange. The Darmstädter Tage der Fotografie has been from the beginning a part of the RAY Fotografieprojekte Frankfurt/RheinMain.