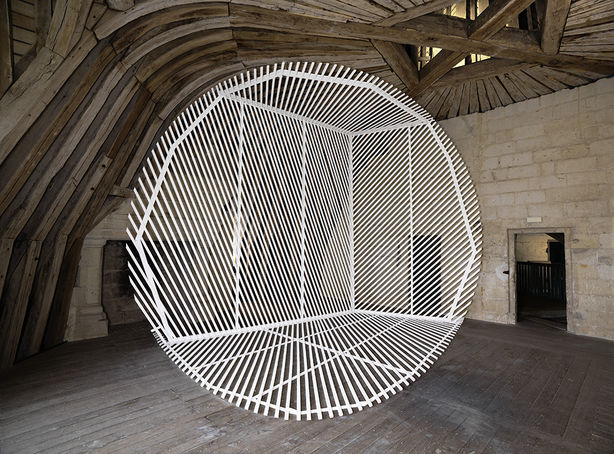 In one of the dungeon’s room, the public could discover the works created by Georges Rousse during his residency in the Chambord’s castle and visit the installations in the castle’s attic.

The three photographs realized by the artist in Chambord not only give to re(view) the place they are taking over, but they form the mise en abyme of the intellectual tension that precedes their edification. To say there is a dialog between Chambord and Georges Rousse’s work is critical idleness: it is more of an inverted mirror’s effect, of the assigned overlap of the original gesture, wonderful distorsion of the real, by means of architecture, under the mental pressure (la cosa mentale) that recompose by hand the lines that appear.

Something appears actually, revealed by photography, that couldn’t be sensed by the public : in a movement similar to Renaissance’s favorite, a secondary form (an hidden meaning) appears in the photographical intervention, i.e. in the change of point of view, and the passage, here from the three-dimensions of the real to the two-dimensions of photography, following the paradoxal operation of augmented reduction.

A catalog retracing all the steps of the creation of the works, from drawing to photography, has been edited by the Domaine National de Chambord.