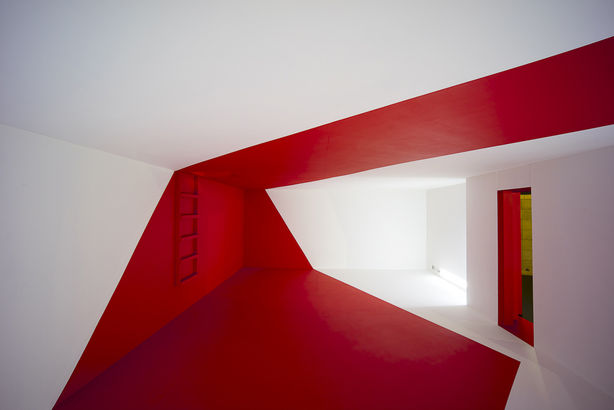 Georges Rousse has taken over various spaces of Bordeaux’ Submarine Pen and transformed them at the whim of his artistic vision, in order to build three in-situ ephemeral and unique works of art.

Abandoned architectures, urban ruins and rehabilitated places have always been constitutive of the theater of Georges Rousse’s creations. If old prisons, abandoned slaughter houses and ruined warehouses have already been used by the artist, he will take over Bordeaux’ Submarine Pen - monumental dimensions bunker - for the first time.

Since his young age, Georges Rousse was impressed and marked by the remains of post-war architecture. with a military father, garrisons, barracks and bunkers have constituted his first playground before becoming his first photographic topics.

In the heart of the Submarine Pen, Georges Rousse could experience again feelings from his childhood. In front of those huge spaces - void attraction - his poetic inspiration mixed with the sensation of oppression and captivity.

Evolving inside the building, the artist could perceive the weight of memory in these walls but moreover it pushed him to find his place in the place’s chronology : the Submarine Pen has a past, but it is also the departure point of a future path.

Notion of time takes a fundamental place in his work. Georges Rousse doesn’t try to commemorate a memory of the Second World War but tries above all to consecrate evolution of the Submarine Pen as a place destined to culture.

Through these three in-situ creations - anamorphosis, illusion, volumetric constructions and geometry in the space - he invests some unique spaces of the site. The illusion created for each specific site, will be visible only from one point, the photographer’s eye, through its camera.

From these interventions will be born three pictures. They will be the memory of the space but also of the artist’s action.

Since 30 years, Georges Rousse follows a reflection about space and light, by taking over ephemerally exceptional architectural spaces, all over the world. And the world became his workshop.

Between September and December, it will be the occasion to discover Georges Rousse’s work with a selection of more than 60 large format photographs.

The course of the exhibition presents installations from all over the world. Its particular display invites the public to a visual walk in which the multiple possibilities of observation and interpretation are put in question with the sight of these optical illusions.

Indeed, Georges Rousse’s work interrogates our perception of reality, misleading continuously our certainties. But it’s only a matter point of view - the illusion consecrating the virtual space being perceptible only from a unique point, the photographer’s at the moment of taking the picture.

The real tridimensional space taken over by the artist is therefore redefine in fictional space once photography has fixed the illusion in its bidimensionality.

The actual improvement of the digital technics could make think that these pictures have been made thanks to photoshop. So this exhibition aims to show that it has nothing to do with digital manipulation, by presenting the artist’s in-situ installations. Those three creations become then a key for the public to understand Georges Rousse’s work, a way to help understand that it is a work on volumes and not a software manipulation.